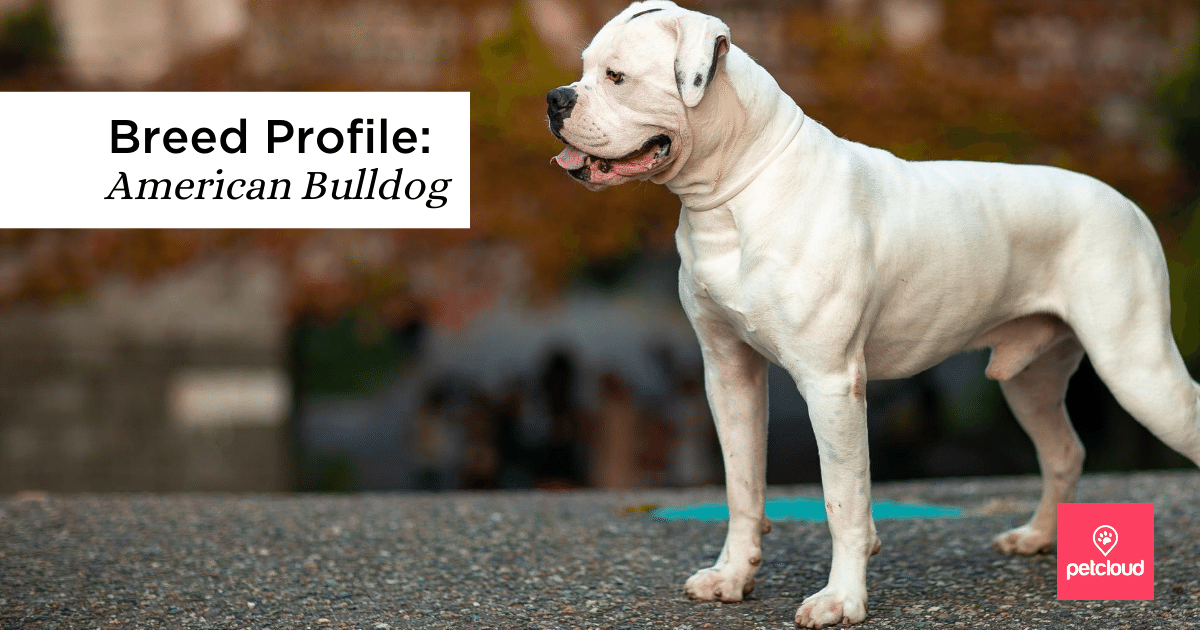 American Bulldogs are fun-loving, gorgeous dogs. Keep reading to find out all that is required to give this adorable breed a loving and nurturing home.

•   Coat: Sort and soft coat. They tend to shed frequently and should be brushed regularly to help maintain the amount of excess fur.

•   Energy: Moderate amount of energy. These dogs require regular exercise and like to do physical activity with their owners

•   Breed Type: Descendant of the English Bulldog, this breed is known for its powerful body and exceptional work ethic.

•   Great Breed For: Apartments. Farmhouses.Families with adequate time to dedicate to the dog

What is an American Bulldog?

The American Bulldog is a strong and loyal dog who loves to spend time with his family. This dog is easily adaptable to a wide range of environments and is able to be happy to sit on the couch with its owner or work outside for a short period of time.

The American Bulldog was bred to be a strong and powerful dog that is versatile and able to adapt to a variety of situations. Historically, this dog was used as a utility dog to work on farms. They have a powerful body and a good work ethic.

Just by glancing at this beautiful breed, you can see that the Bulldog bloodline is prominent in the dog. They have a medium-sized body that is more muscle than fat. They also have a square head that is shaped like an English bulldog; however, their snouts are slightly longer and more pronounced. They have a short coat of fur and come in a variety of colours.  See also the British Bulldog.

What Makes the American Bulldog Special?

The American Bulldog is a hard-working dog that can be a great asset to many farmer s and ranchers. They are mainly used on the farm to guard and catch livestock. They are very protective of their family and their animals. They make great guard dogs but are also loving and compassionate companions.  Out of all of the different Bulldog breeds around today, the American Bulldog may arguably be one of the most hard-working and versatile of the Bulldog breed.

How Often Should I Groom My American Bulldog?

American Bulldogs are extremely easy to groom. Their short coats require a good brushing every couple of days to help keep it clean and healthy. They only require to be bathed occasionally unless they become excessively dirty.  They do shed, especially during the warmer months. During their shedding periods, you should brush them at least once a day.

To ensure that their nails do not grow too long and become uncomfortable, it is recommended that you have their nails clipped at least once every two weeks. They have also been known to easily get cavities in their teeth, so try to brush their teeth regularly as well.

How Often Should I Walk My American Bulldog

The American Bulldog needs regular exercise to ensure that they are happy and healthy. They enjoy going on brisk walks and playing fetch with their owners. If they do not get regular exercise, they are more prone to developing behaviour problems due to the amount of pent-up energy that they have.  While they do require frequent exercise, owners should try to implement a low-impact exercise regimen with their dogs to help prevent any bone or joint damage.

How Do I Train My American Bulldog?

American Bulldogs should be socialized with other people and animals at a very early age. They are eager to please their owner, but they also have a lot of energy, which could require your puppy's training to take a little longer than other breeds.

They do not respond well to aggression and anger. So, when you are training your puppy, be sure to use a firm, but gentle tone. They also respond well to positive reinforcement. Try to have plenty of treats handy during the training sessions and be sure to praise any good behaviour.

How long will my American Bulldog live?

The average lifespan of an American Bulldog is between 10 to 12 years.

Can my American Bulldog be left at home during the day?

American Bulldogs are happiest when they are around their owners. They do not like to be left at home by themselves. Your dog may be okay to be left by themselves for an hour or two, but anything longer than that, and your American Bulldog will start to act-out and could develop behaviour problems. It is recommended that is you plan to leave your home for an extended period of time, you should have a dog sitter spend the day with them to ensure that they are staying happy and engaged.

What kind of health risk does the American Bulldog have?

The American Bulldog is a healthy breed for the most part. They are not prone to develop any serious life-threatening conditions. However, they have been known to develop hip and elbow dysplasia quite often. Other than that, regular check-up and vaccinations are all that is required to maintain your dog's health.

Do American Bulldogs Bark A Lot?

American Bulldogs are highly alert dogs. They are usually quite dogs while they are in the home. But as soon as they hear or noise or see someone that they do not recognize, they will be quick to let out a loud bark that does not stop until the "threat" is gone. Early socialization can help prevent them from barking at every stranger they see when they get older.

Is an American Bulldog the Right Breed for Me?

American Bulldogs are friendly and energetic dogs that love to spend time with their families. They not only require a lot of exercise on a daily basis, but they also crave a lot of attention from their owners. American Bulldog owners need to be able to dedicate a large portion of their day to taking care of their dog's physical and emotional needs. If you do not have a lot of free time in your life, the American Bulldog may not be the right choice for you.