Is the British Bulldog the Right Dog for You? 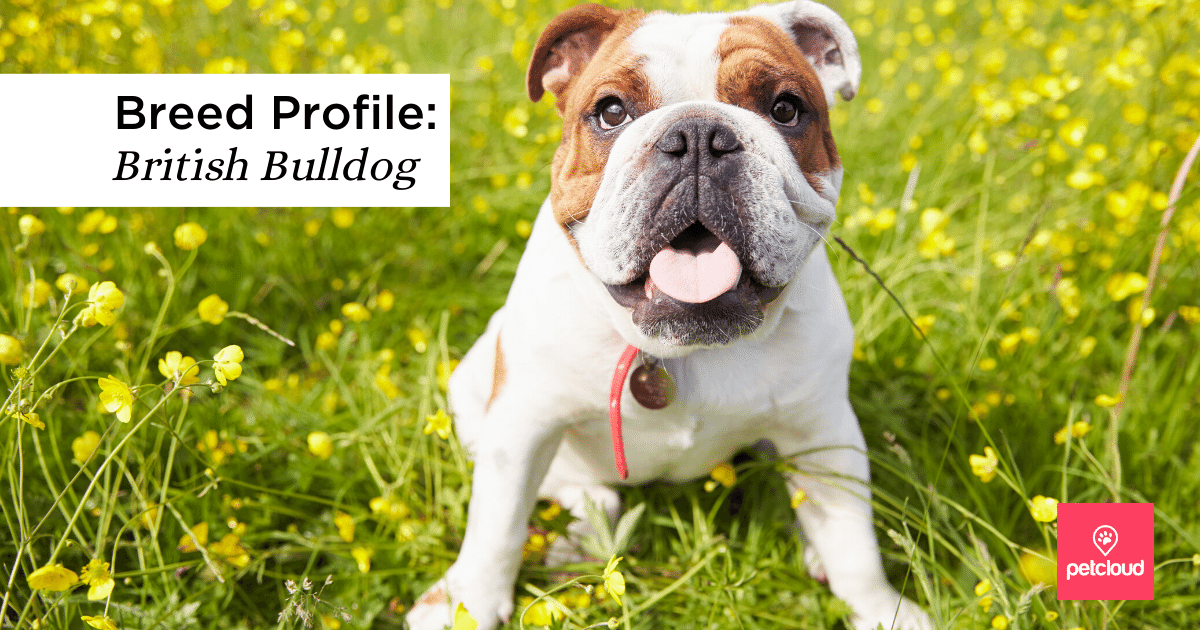 Don't let the British bulldog's intimidating look frighten you off! This gentle beast is revered for its calm, friendly, and family-loving personality. Here's everything you need to know about this popular dog breed.

What Is a British Bulldog?

British bulldog's trace their history back to ancient times when they were bred from mastiffs for fighting. Their muscular bodies, sour expression, and protruding teeth speak to this ferocious past. However, unlike more modern fighting dogs, British bulldogs are famously gentle and make reliably good pets. Many would rather nap than pick a fight with any other pup. Although they are gentle and sweet-tempered with their owners, they can be tenacious about protecting their family.

British bulldogs are typically docile, which makes them somewhat easy to train (although they can be obstinate if you let them have their way) and they are exceptionally good with children. Their sweet disposition makes them an all-around joy to be around. They love to relax, eat, and play fetch.

British bulldogs typically feature soft, loose skin--around their face and head in particular. They are medium-sized dogs but quite muscular. Most people recognize this breed by its telltale pushed-in nose, droopy up lip, and protruding fangs. They stand about 40 cm tall and boast a broad chest and short muscular legs. Some British bulldogs are a single color but many feature a multi-colored coat of short, sleek, low-shedding hair.

What Makes the British Bulldog Special?

British bulldogs are widely popular around the world because of their sweet temperament and muscular physique. Many people opt for this dog because it doesn't require a lot of activity, which makes it ideal for apartment dwellers. These dogs are excellent companions for both children and adults. They shed less than many other breeds and they seem to like nothing better than to take long snoozes with their owners.

How Often Do I Need to Groom My British Bulldog?

British bulldog owners should use a soft brush to brush their dog's coat a few times a week in order to keep it glossy. It's important to use a damp cloth to clean the dog's wrinkles on a daily basis and dry them completely afterward. These dogs' noses have a tendency to become dry and flaky. If that happens, use a dab of petroleum jelly to moisten the nose and protect it from drying out.

How Often Should I Walk My British Bulldog?

British bulldog's should have at least 15 minutes of exercise each day. While your bully might seem reluctant, it's important to make it take its walk or play a game of fetch as these exuberant eaters sometimes have a tendency to grow obese if left unchecked. Most bulldogs do enjoy playing games with their owners at least for a brief period of time before they decide to lay down in the sun. And speaking of sun--these dogs do not tolerate heat well, so be sure to get their exercise in before or after the hottest part of the day during the warm season.

How Do I Train My British Bulldog?

Training sessions should be short, fun and consistent. This is the best way to hold keep your dog's attention and promote training success. Pet Cloud offers dog training classes in blocks of six-week, one-hour sessions with registered trainers. An experienced trainer will come to your home and use positive reinforcement techniques as recommended by the RSPCA to teach your puppy. Follow the link to post your job!

Can I leave my British Bulldog alone during the day?

Some British Bulldogs may be prone to separation anxiety, but you can head this off by practicing leaving your pet for short periods, building up to daylong absences. Because these dogs love to lounge and sleep, they're often unbothered by their owners' need to leave home and earn a living.

These dogs are low to medium barkers. They're mild mannered unless they're riled by a stranger or a knock at the door. Their growl can be intimidating but they are essentially mild-mannered even with strangers.

Are there British Bulldog health risks I should know about?

Unfortunately, this popular dog breed is prone to a variety of health complaints. Overbreeding is partially part of the problem, which is why it's essential to choose a reputable breeder when purchasing a British Bulldog. This breed tends to be prone to conditions such as respiratory problems, skin allergies, hip dysplasia, cherry eye, degenerative spine disease, and joint and ligament injuries.

Where Can I get a British Bulldog?

Although these dogs do not on average enjoy the longest of life spans, they are revered for their good temperament. If you prefer, you may search for a rescue British bulldog rather then purchasing one from a breeder. Check out the RSPCA's adoption guide to see if this is the right solution for you. If you want to purchase your British bulldog from a breeder, be sure to use this handy guide for finding the right breeder from the RSPCA.