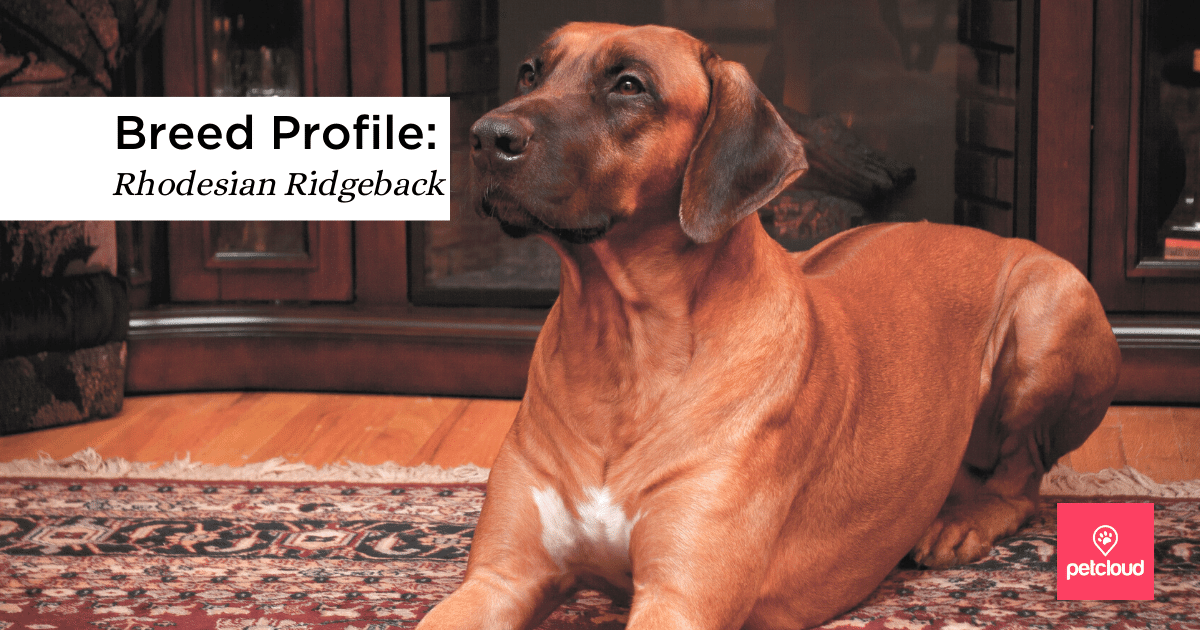 Rhodesian Ridgebacks are beautiful and intelligent dogs. Read below to find out if this breed would be right for you.

•   Size: They can weigh anywhere between 30 and 39 kgs and when they are fully matured, they can range between 63 to 67 cm tall

•   Coat: They have a short, soft coat. They are known to shed occasionally and should be brushed at least once a week

•   Energy: High-energy dogs that require a moderate amount of exercise. They should be taken for a brisk walk at least once a day

•   Breed Type: A breed of hound. The Rhodesian Ridgeback is a strong, athletic breed that is also loyal and protective of its family

What is the Rhodesian Ridgeback?

The Rhodesian Ridgeback is a well-mannered dog that is loyal and loveable. This athletic dog loves to play outside with its family members and other animals. And is also very affectionate and friendly to almost anyone it meets.

The Rhodesian Ridgeback is a hound dog that originated in Europe. While looking for a dog that was both agile and a good hunter, breeders crossed the African Khoikhoi dog with various other breeds, including the Terrier and Greyhound to create this very athletic, protective, and loyal breed.  Today, this breed is still extremely popular among North American and European hunters. However, they also make great family companions.

Rhodesian Ridgebacks are big, powerful dogs. They can weigh anywhere from 30 to 39 kgs. They have a short, yet soft, coat of fur that is the colour of wheat. Although their fur only comes in one colour, the shade of the colour can vary from dog to dog.

When you first glance at the Rhodesian Ridgeback, you can see the hound bloodline. They have a wide head, prominent and narrow muzzle, and long ears that flop down to rest near each side of its face. Although these dogs tend to weigh quite a bit, the majority of their weight comes from pure muscle and they look very slender and fit.

What Makes the Rhodesian Ridgeback Special?

These dogs are very athletic and do well with agility competitions. They are also great swimmers and love to splash around in the pool during the summer.

They have a very loveable personality. And once you have gained their trust, they consider you to be a friend for life. They are very protective over their family members and usually get along well with other people and animals that are not in their family.

How Often Do I Need to Groom My Rhodesian Ridgeback?

The Rhodesian Ridgeback does not require an excessive amount of grooming. Thoroughly running a brush through your dog's coat once a week should do the trick. They only need to be bathed occasionally unless they get excessively dirty. And their nails should be trimmed regularly to ensure that they do not grow too long and cause discomfort.

How Often Should I Walk My Rhodesian Ridgeback

Rhodesian Ridgebacks have a high amount of energy and require a good amount of exercise every day. They love to run, play, and chase after objects. They are, however, able to easily adapt to a wide range of environments. And if you do not have a large yard for them to play in, they will be perfectly happy to go on a brisk jog or walk with their owner once a day.

If they are left outside by themselves, they should be monitored closely if they are around other small animals as they are naturally a prey animal.

How Do I Train My Rhodesian Ridgeback?

Rhodesian Ridgebacks require a good amount of training from the time they are incredibly young. Although they are intelligent dogs, they can also be stubborn and strong-willed. So, you may have to do several repetitions before your dog starts to obey your command.

When training the Rhodesian Ridgeback, it is important that you use a firm but loving tone. This will show your dog that you are the boss and they will be more inclined to listen to your commands.

How long will my Rhodesian Ridgeback live?

Most Rhodesian Ridgebacks live to be between 10 to 12 years old.

Can I leave my Rhodesian Ridgeback at home alone?

While the Rhodesian Ridgeback does love to spend time with their family, they are also very independent and will be fine if left by themselves for long periods of time. As long as they have plenty of food and water that is easily accessible throughout the day, you can leave your dog home while you are at work or running errands.

What kind of health risk do the Rhodesian Ridgebacks have?

For the most part, Rhodesian Ridgebacks are pretty healthy dogs. They have been known to have a few non-life-threatening conditions including hip dysplasia, elbow dysplasia, problems with their eyes, and thyroid issues.

In some rare cases, Rhodesian Ridgebacks have been known to be born with a condition called Dermoid sinus, which is a small opening in their skin. Usually, experienced breeders know to look for those anomalies and will get it checked out and fixed by a vet.

Do Rhodesian Ridgebacks bark a lot?

Rhodesian Ridgebacks can be very vocal at times. They are usually calm, however, if someone were to come knock on your door, they would quickly hear the loud and consistent barking of your protective pooch.

Where Do I Get a Rhodesian Ridgeback?

Because they can be strong-willed and difficult to train, you should not consider owning a Rhodesian Ridgeback unless you are experienced with this breed or willing to work with an experienced breeder to learn how to properly care for it.

Because of their stubbornness, many Rhodesian Ridgebacks are sadly abandoned each year. If you think that your home would be the perfect place for a Rhodesian Ridgeback, consider looking your local shelter before going to a breeder.