Could the Bull Terrier be the perfect match for you?

If you're looking for a furry friend that's both sweet-tempered and highly trainable as well as super cute - the Bull Terrier might just be the one for you! Everything you need to know about one of Australia's favourite breeds.

What is a Bull Terrier?

Bull Terriers may be a small to medium sized dog, but they pack in tons of personality. They're known for being both independent and stubborn. Although they have moments of obstinance, Bull Terriers love being around people.

This breed was developed to tackle excess vermin and perform in animal-based blood sports. Bull Terriers were based on the English Bulldog and Old English Terriers. Many breeders agreed that this hybrid enhanced their ability to fight!

Bull Terriers have also been featured in different forms of media. The New Yorker cartoonist, George Booth, featured one in print and George S Patton owned one of these dogs in the film Patton.

Bull Terrier's most distinguishable feature is their long, flat face. They are often described as "egg-shaped head." Bull Terriers are the only dogs that have triangular shaped eyes! They have well-developed nostrils and a strong lower jaw.

They can vary in colour ranging from white, red, fawn, brindle, black or a combination of a few. The males weigh 25-29kg while the females are about 20-25kg. On average, they are about 46-56 centimeters tall! 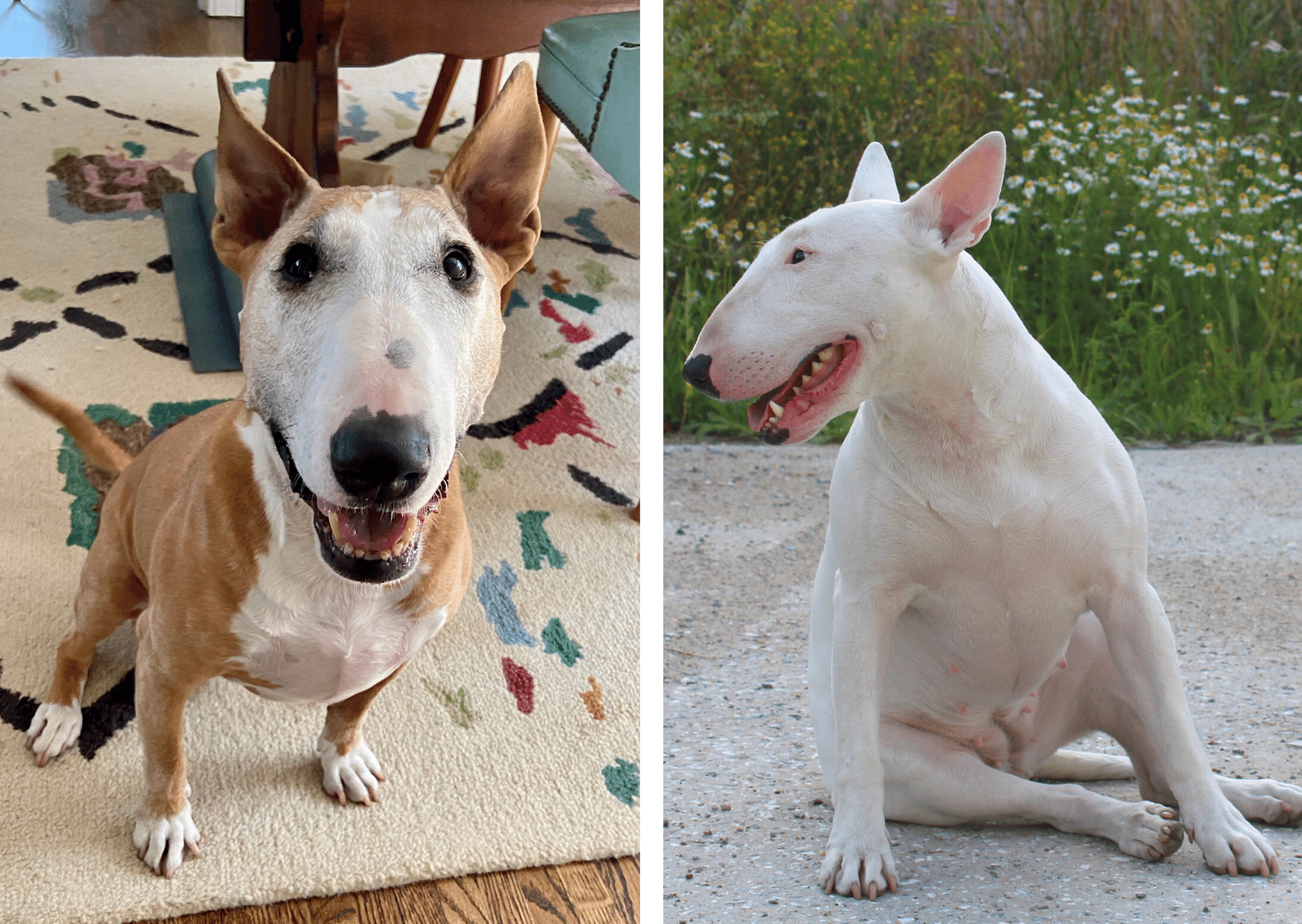 Bull Terriers are known for being stocky and muscular. They're very powerful and originally bred to fight. At one point, Bullies were called the "canine gladiators." In England, the Humane Act of 1835 further prohibited blood sports to protect the dogs. At this time, dog fighting was a source of entertainment for spectators. People would host these events in outdoor pits, barnyards or garages. People would gamble and make it a whole night! Despite their history, Bull Terriers are very loveable and social dogs.

How often do I need to groom my Bull Terrier?

A weekly brushing and light wipe-down with a damp cloth is all your Bull Terrier needs. Like most dogs, Bullies also shed intensely twice a year when the seasons change (fall and spring). During this time, it's recommended you give them extra brushing. Long nails will permanently damage your pup's feet so make sure to trim them or take them to a professional dog groomer.

How often should I walk my Bull Terrier?

Bullies have tons of stamina and endurance and are naturally athletic dogs. It's important to walk your dog for at least an hour daily or book a daily program of dog walks with a professional dog walker. If your Bullie is trained with recall and has been socialised, you can let them off-leash in a fenced council off-leash park to run and explore around. Bull Terriers aren't long distance runners but they'll happily fetch a ball and play games with you! 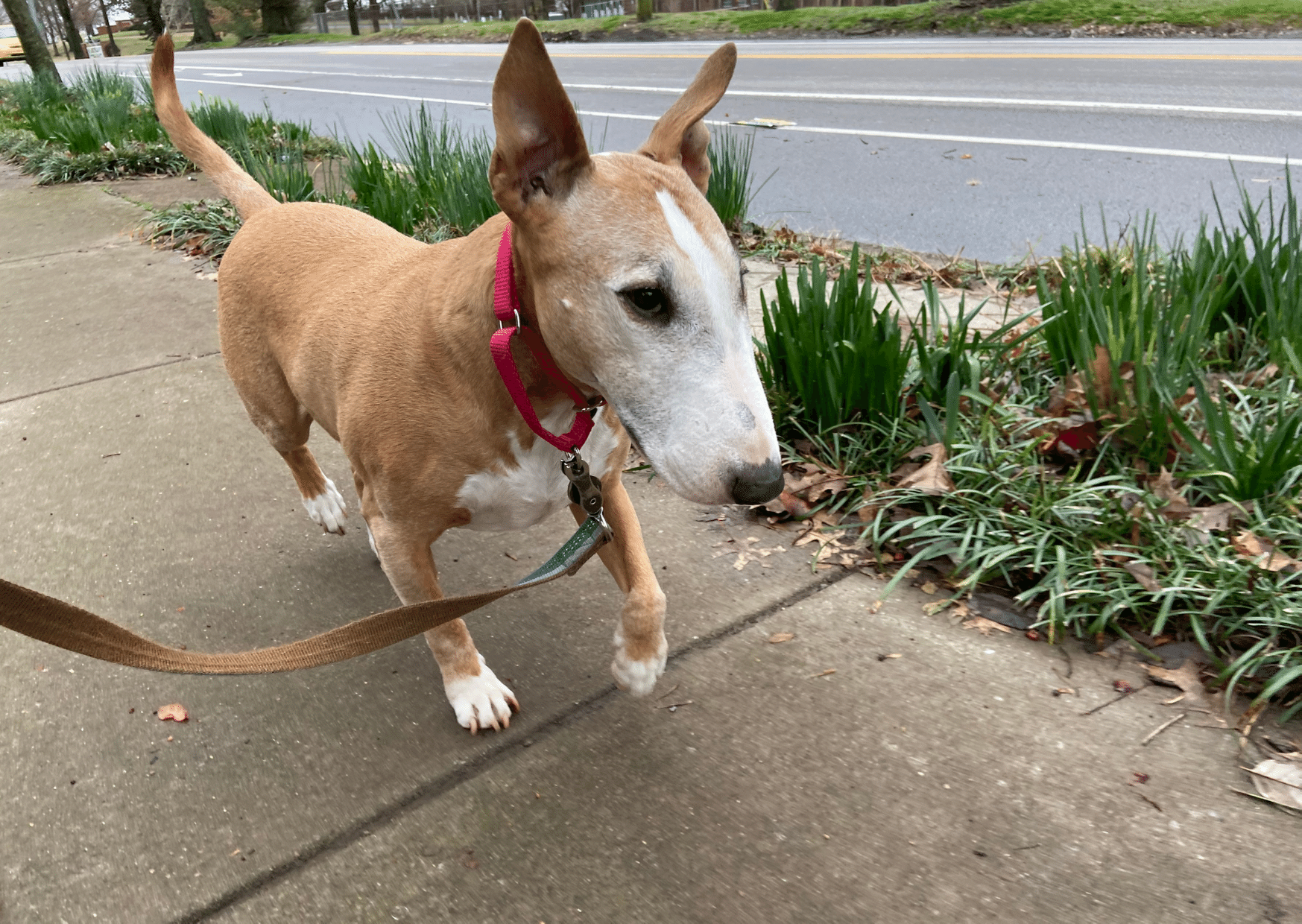 How do I train my Bull Terrier?

Whether you get your Bull Terrier as a puppy or an adult, it's important to train them right away. The sooner they know who their owner is, the easier it will be to do more activities with them! It's recommended you use positive reinforcement such as treats, praise and enthusiasm. Making your training sessions short and sweet is the best way to keep your dog engaged.  PetCloud offers dog training classes over the span of six weeks. A professional registered positive reinforcement dog trainer will come to your home and use positive reinforcement techniques in line with RSPCA guidelines to teach your puppy.

Who are the best Pet Sitters for my dog?

Booking a professional, trained, and police checked pet sitter with an escape proof, hazard free property where your bully can stay is recommend.

How long will my Bull Terrier live?

Can my Bull Terrier be left home alone?

These dogs thrive in the company of their owners. If they're left alone for over 8 hours, haven't had any exercise and feel bored, they can become destructive. If you do need to leave the house, it's important to walk your pup beforehand and make sure it's fed and gone to the bathroom.

Bullies are known for barking a lot. If this is a big concern for you, it's recommended to train your dog as early as possible to not bark.

Most Bull Terrier puppies are checked for deafness. This occurs in about  ¼  of pure white and coloured Bullies. This type of dog is prone to developing skin allergies and bugs (such as fleas, mites, mosquitoes) contribute to their allergic responses. When you're outside with your Bullie, take note of the insects around you!

Where can I get a Bull Terrier?

Now that you've decided to go with the Bull Terrier, your next step is knowing where to get one! You have a couple options: adopt or shop. If you decide to adopt, you're giving a dog a chance at a home it deserves! Be sure to check out the RSPCA's adoption guide for more information.  If you're wanting to buy yourBull Terrier from a breeder, make sure the breeder is responsible and isn't supporting a puppy mill! The RSPCA also has a handy guide for finding the right breeder.