Could the Irish wolfhound Be the Perfect Match for You? 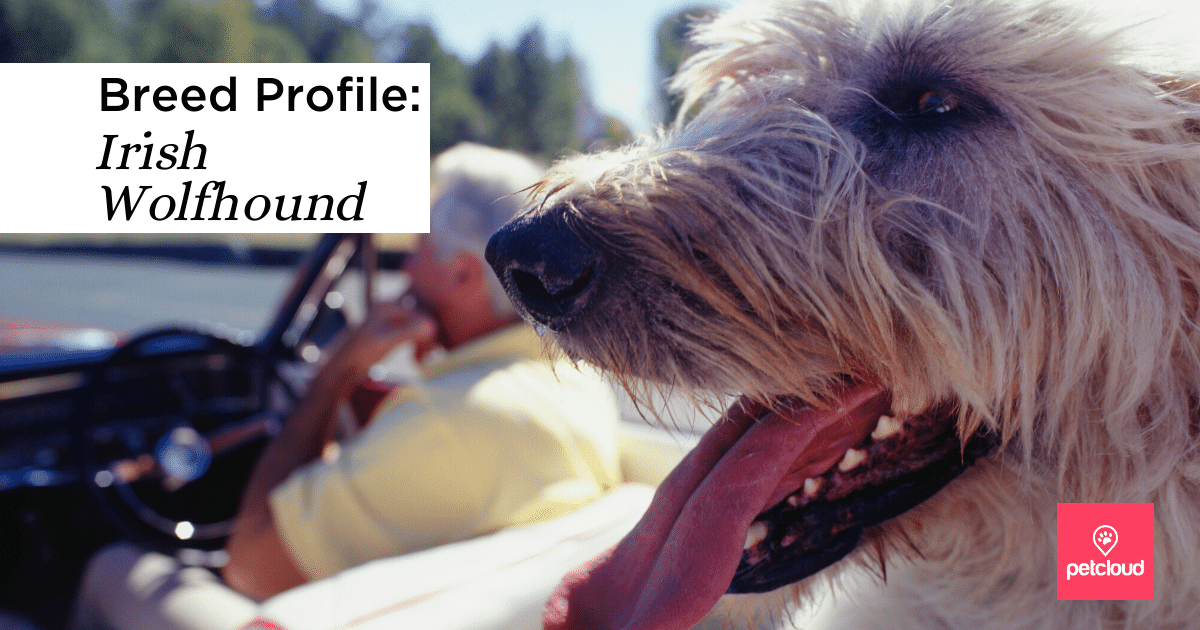 If you have plenty of space in your home and are looking for a large, gentle dog, then the Irish wolfhound might be the perfect companion for you! Carry on reading to find out more about this giant breed.

What is an Irish wolfhound?

The Irish wolfhound was thought to be brave and fierce in battle and was originally used as a war dog to haul men out of chariots and off horses. The breed was also used to guard herds and property and to hunt for deer, elk, boar, and wolves. The Irish wolfhound was once held in such high esteem that many battles were fought over it. At one time, only kings and the nobility were allowed to own Irish wolfhounds.  Today, these dogs are thought to make affectionate and loyal companions that are good with children.

The Irish wolfhound is the tallest dog in the world and is large and muscular with a deep chest and long body. They have a long head with bushy eyebrows and ears that are carried back against the head. The forelegs are strong and muscular, and the thighs are long and straight. It has a rough, wiry coat that sheds less dander than most large breeds.  The Irish wolfhound stands at around 81.2 cm and weighs about 48 to 70 kg. The coat comes in several colours, including fawn, brindle, wheaten, brown, and red - wheaten and grey being the most common colours. 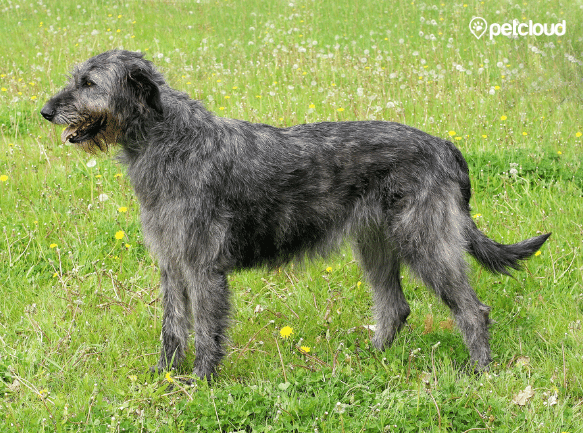 What makes the Irish wolfhound special?

There is a sad tale about an Irish wolfhound that shows the breed's level of devotion and loyalty. The tale is about an Irish wolfhound called Gelert that was sent to Llewellyn, the Prince of North Wales, by King John of England in 1210. One day, Llewellyn left Gelert in charge of his son while he went off hunting. He returned later to find the dog covered in blood and his son missing. Llewellyn was furious and killed the dog immediately. However, he then found his son alive and well a short distance away next to a dead wolf that Gelert had killed. Llewellyn was devastated by what he had done and later decided to erect a tomb in Gelert's honour that can still be seen today in Caernarvon, Wales.

How often do I need to groom my Irish wolfhound?

The Irish wolfhound's coat needs an average amount of grooming to remove any loose hairs and keep it in good condition. Bathing may be required from time to time, but plenty of space and towels will be necessary to bathe a dog of this size! About twice a year, the coat needs to be professionally stripped by a dog groomer. Attention should also be given to the hair around the toes, as it can get quite long and harbour dirt and debris.

How often should I walk my Irish wolfhound?

Irish wolfhounds need around two hours of exercise a day to keep them in peak condition and prevent them from getting bored too easily. This breed also makes a good running partner, as it is built for endurance.

How do I train my Irish wolfhound?

Irish wolfhounds can be quite clumsy and slow to mature, but training should still be started early on in their lives. They respond best to consistent and positive reinforcement and are best trained by one particular person to avoid any inconsistencies in their training regime.

How long will my Irish wolfhound live?

Irish wolfhounds unfortunately have quite a short lifespan of around six to ten years.

Can my Irish wolfhound be left alone during the day?

Irish wolfhounds don't like being left home alone for long periods of time. These dogs form strong bonds with their families, and they can become depressed and destructive if they are left on their own a lot. If your dog is going to be alone for long periods of time during the day, it may be a good idea to check out the petcloud.com.au website for further details on day care for dogs.

Irish wolfhounds do not generally bark a lot, but this can depend on the personality of the dog and the training it has received.

What kind of health risks do Irish wolfhounds face?

Irish wolfhounds are generally quite healthy, but they can suffer from a few diseases, such as hip dysplasia and progressive retinol atrophy.

Where can I get an Irish wolfhound?

If you have now decided that this large and gentle breed is perfect for your family, then you will obviously want to know where to get one from. It is important to find out where the best places are in your area for purchasing an Irish wolfhound. Search to find reputable breeders and avoid buying from pet shops, puppy mills, or anywhere that does not allow you to see the puppy's parents.

You can also take a look at the RSPCA website that will guide you on how to adopt a puppy or dog.

Ready to Create your free Pet Profile? PetCloud is free to join: Keep track of your Pet's Vaccinations, or annual checkups, store their Vet Certificate, even hire a Pet Sitter - all in your very own PetCloud!