Could the French Bulldog be the perfect match for you? 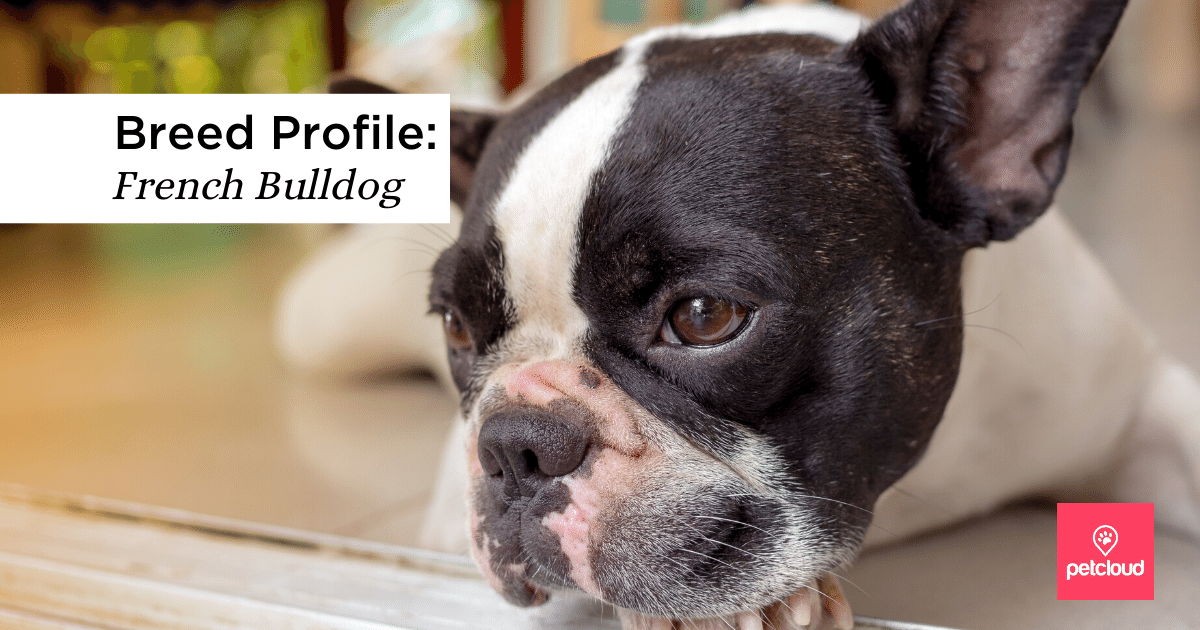 If you're looking for a little cuddle buddy to join your family, then this just might be the pup for you! Everything you need to know about one of Australia's favourite breeds.

What is a French Bulldog?

French Bulldogs are great companions and crave human connection and affection. They're one of the most popular dogs in the world, coming in at second most popular registered dog in the United Kingdom in 2019.

In the 1800s blood sports (bull-baiting) were outlawed, leaving Bulldogs unemployed. They were bred for companionship as opposed to sporting events. To reduce the size of some Bulldogs, they were bred with terriers or ratters to make them smaller. Eventually came the French Bulldog.

French Bulldogs vary in colours including brindle, pied, cream, fawn, black and blue. Their fur is short, silky and very soft. They have square faces, a muscular body and small frame and their loose coat will wrinkle. On average, French Bulldogs are about 11-12 inches tall and weigh about 10-13kg.

What makes the French Bulldog special?

French Bulldogs are super friendly, they have the cutest and pointiest ears and they're the ultimate companions. They're not necessarily a "barky"dog but they have a special way of communicating by using yawn, yips and gurgle sounds. Sometimes they'll even sing with you in the car! What's more adorable than that?

How often do I need to groom my French Bulldog?

Because French Bulldogs have such short hair, they don't need consistent brushing. Giving them a quick brush every few weeks is fine! Frenchies do require some regular bathing as they can get a little smelly. Don't overdo the bath because it can dry out the skin below their fur. Make sure the shampoo you use is dog-friendly.

How often should I walk my French Bulldog?

Frenchies aren't naturally very athletic dogs which is why they're so great for apartment living! Walking them for 30 minutes a day will suffice. Giving French Bulldogs the chance to go to the dog park to socialize and interact with other dogs is another excellent alternative. Because of the way they're bred, French Bulldogs overheat easily and can have trouble breathing. It's best to walk them in the mornings when it's cooler outside.

How do I train my French Bulldog?

French Bulldogs may be little dogs, but their personalities can pack a hilarious punch. They can often be stubborn when it comes to training. The best way to go about this is to stay patient and consistent. If you decide to train your Frenchie yourself, incorporate games/chasing a ball/being goofy into the lesson plans. If you decide to go with a trainer, they will use positive reinforcement! Pet Cloud offers dog training classes in blocks of six-week, one-hour sessions with registered trainers. The trainer will come to your home and use techniques in line with RSPCA guidance to teach your puppy.

How long will my Frenchie live?

The average lifespan is 10-14 years

Can my French Bulldog be left alone during the day?

Frenchies don't do well when they're left home alone for extended periods of time. They start feeling anxious and need tons of attention. When they're left to their own devices for many hours they can pee or poop around your home. If you have to leave for more than an hour, put your Frenchie in a crate and make it comfortable.

French Bulldogs aren't known as a breed that barks a lot. It depends on the frenchie, but they're not excessive barkers.

What kind of health risks do French Bulldogs face?

A fair amount of expensive health risks. Because of the way they were bred, French Bulldogs may have patella issues (dislocated patella). The patella is a small bone that shields the stifle joint in their hind legs. This bone is surrounded by ligaments and when the knee joint moves, the patella slides in with the femur. There have been many cases where the kneecap can dislocate towards the inside or outside of the leg.  Frenchies also have temperature regulation issues. It's important that they don't overheat, especially when it's hot outside. They are prone to heat stroke and become cold quickly.  They're a brachycephalic breed which means they have snub noses which leads to difficulty breathing when stressed or hot. Many Frenchies are banned from airlines because many have died while in the air.  Some may need operations on their nose and airways if they regularly snore and struggle to breathe.

Where can I get a French Bulldog?

Now that you've read all about Frenchies, you've decided to go ahead with one! Awesome. You have two options: adoption or breeder. If you decide to adopt, you're giving a dog a new home it deserves. Check out the RSPCA's adoption guide to find out more.  If you want to go the breeder route, make sure they don't support the puppy farm industry.

Please also read the RSPCA's Smart Puppy & Dog Buyers Guide and consider donating if you appreciated their great advice - this will support the great work they do in educating the community and fighting animal cruelty and neglect.