Could the Pomeranian be the perfect match for you? 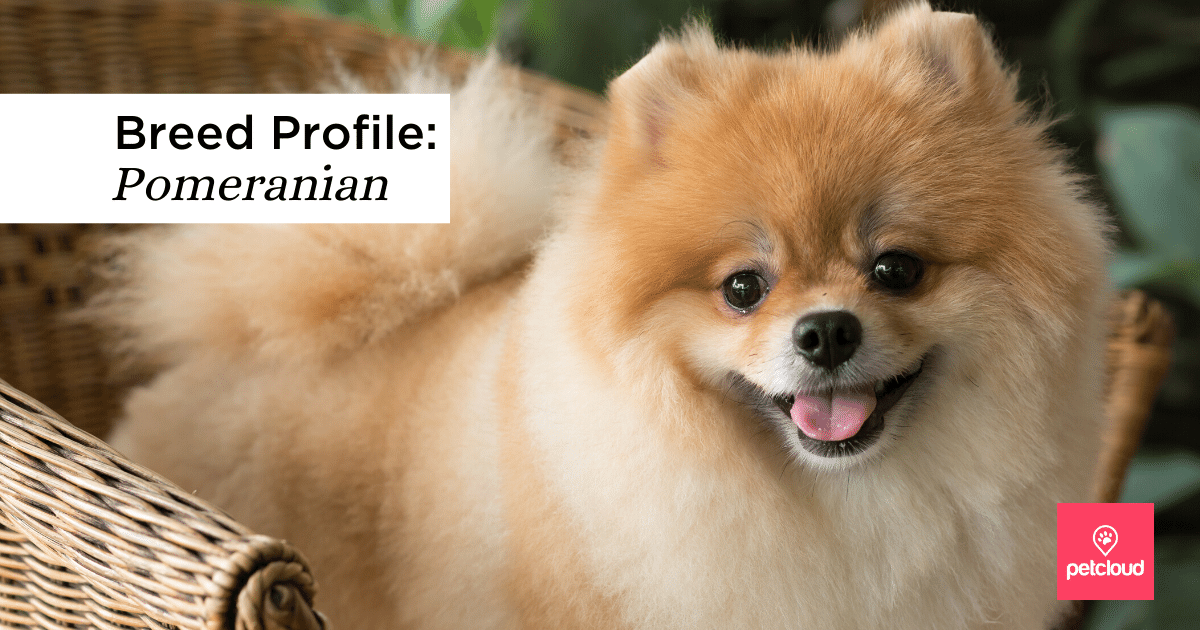 Pomeranians are friendly, lively and playful! They're perfect for cuddling and traveling. If this sounds like exactly what you need, then this just might be the dog for you. Everything you need to know about one of Australia's favourite breeds.

What is a Pomeranian?

Pomeranians are a breed of dog of the Spitz type. Spitz dogs are a domestic dog characterized by thick, long and white fur and pointed ears. Their tails often curl over a dog's back. The Pomeranian received its name from the Pomerania region in north-west Poland and north-east Germany.

Poms became popular by many royals in the 18th century. Queen Victoria had her own Pomeranian and they were made popular shortly after. During the reign of Queen Victoria, the Pomeranian's size decreased.

Poms are small dogs that weigh 1.3-3.1kg and stand about 20-36 centimeters tall. They are sturdy little dogs with a double-coat. Their top coat makes a fluffy ruff around their neck, a quality they're known for! They can vary in colour including white, black, cream, orange, sable, tan, black and red.

Pomeranians were originally bred to pull sleighs, guard livestock and guard homes. Don't underestimate this little ball of fur! Now Poms are bred as companions for families and small homes.

What makes Poms so great is their personality! They're feisty, perky and have tons of energy for a little dog. When it comes to interactions with other dogs, specifically larger dogs, they tend to forget about their small stature. They will occasionally tackle and or bark at larger dogs! But not worry, it's all fun and games.

How often do I need to groom my Pomeranian?

Pomeranians need to be groomed at least three times a week. Because of their dense fluffy fur, brushing weekly will help avoid matting and knots. You can use pin, slicker or bristle brushes! You can bring your Pom to the groomers for a trim in the summertime so they don't overheat. It's recommended to avoid doing this during the winter months as they get cold quickly.

How often should I walk my Pomeranian?

Poms thrive when walked twice a day. Once in the morning and evening for 20-30 minutes is perfect. Avoid times when it's overly hot outside. If they don't get enough exercise and mental stimulation, it can result in boredom and extra energy around the house.

How do I train my Pomeranian?

Because Poms pack in a big personality in their little bodies, training them is essential. Their friendly and lively humour is coupled with them also wanting to prove themselves to their humans and stand guard. If they're not trained properly, they can become dominant and stubborn. If you're training your Pom, be sure to use praise, treats and positive reinforcement!

With PetCloud, you can have a trainer come to your home over the period of six weeks! They will use positive reinforcement techniques in line with RSPCA guidance to teach your puppy. Check out these  dog training classes to learn more!

How long will my Pomeranian live?

Can my Pomeranian be left alone during the day?

Once your pup is over the age of 8 weeks, it will be able to stay home for extended periods of time. It's recommended not to stay out longer than 8-9 hours at a time. Because Pomeranians are very social, they start to miss their humans. They can get separation anxiety when they're often left alone.

Pomeranians have a tendency to bark often, especially when they sense an intruder! They're excellent watch dogs for this reason. You can easily train your pup not to bark by using treats and repeatedly saying "No!"

What kind of healthy risks do Pomeranians face?

Overall, Pomeraninas are very healthy dogs. The merle coloured dog is prone to severe deafness and increased intraocular pressure. These health risks occur when the offspring is bred from two merle Poms.

Luxating patella is another issue with the Pomeranian breed. This occurs when the ridges forming the patellar groove in the knee are too shallow. This inhibits the patella from sitting properly and securely. This happens when your Pomeranian has a malformation or trauma.

Where can I get a Pomeranian?

Now's the moment where you've decided to get a Pom! How exciting! You now have two options: go through a breeder or adopt. If you decide to go the adoption route, just remember you're giving a dog a chance at a new home. Be sure to check out the RSPCA's adoption guide to find out more.

If you're wanting to buy your Pomeranian from a breeder, do your research to make sure they're responsible and you're not supporting a puppy farm. The RSPCA also has a handy guide for finding the right breeder.